Laban Pheidias: A Recipe For Radness 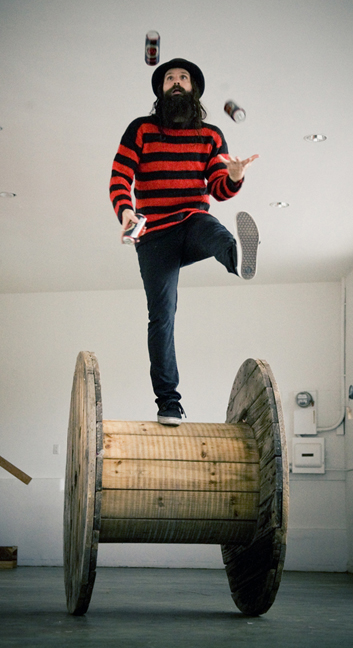 He has a huge beard, a knack for being photographed mid-air, and more counter-culture punch than any rebel I’ve met. He’s also challenging the television and film industry to be more green, starting an eco-skateboard line, and making more videos than a vlogger on speed. This west-coast boy was raised vegetarian, became vegan, and thinks driving a veggie-diesel car and everything from Gypsy Music to Nick Nolte is cool. Meet Laban Pheidias. And remember his name, ’cause you’ll be dropping it later. 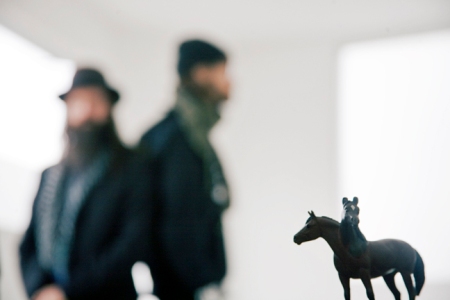 Discerning Brute: Hey Laban! Good lord, you have so many things going on. How do you make time for it all? Tell us about your recent projects, what you’re the most stoked about, and whether you were always an over-achiever?
Laban Pheidias: I enjoy having a lot of things on my plate. Not every project or thing I do gets to see the light of day, or at least not right away. It has to be the right time for certain projects. Right now, 2headedhorse (our production company) keeps me and my biz partner, Ted Newsome, pretty slammed. We just moved 2headedhorse into a big building in Echo Park. It’s cool because now our employees don’t have to see me in my underwear at our house. We’re currently wrapping up season 2 of Stupidface (our crazy comedy show). The series premiere is on 1/1/2009 at 1:00am et (10:30pm pt)on Fuel TV. We also just inked a deal for Built to Shred season 2. And we’re also gearing up for American Misfits season 3. This is very exciting to us  because we’ve taken such a long break from it and we’ve got a bunch of new ideas that will invigorate it. I can’t say to much about it now, but let me put it this way, we’re getting out of the bosses clutches and steering it in a new direction. Also, on the horizon are two very unique projects that entail music videos and a feature film. 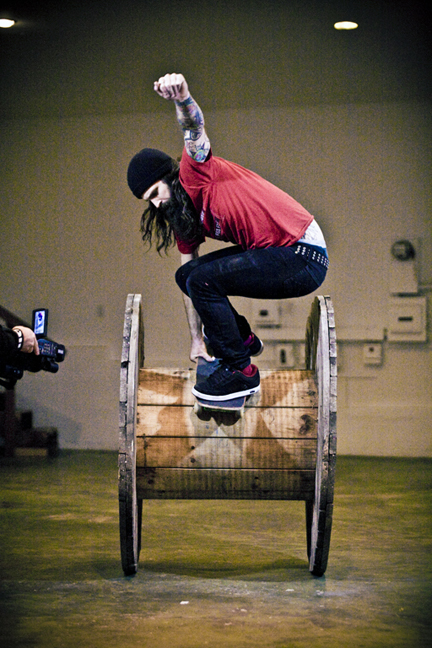 DB: Wow…you are busy. Skating is clearly a total lifestyle for you. When did you get into skateboarding, and did it have anything to do with your veganism, or vice versa?
LP: I grew up with skateboards in sunny California, but I really got into skateboarding when I was about 14 years old living in Maine. Rob Collinson (Lowcard zine) was the local outcast skater kid in town. We became friends and skated (and ran from cops) every day. I was born and raised vegetarian so I’ve never eaten meat, but it wasn’t until I was living in Oregon when I was around 16 that I became aware of the vegan lifestyle. I met this over the top punk rock activist dude with a big spiked mohawk and a “leather” jacket with the words “Fuck you! It’s not leather” written in red on it. He told  me about all the terrible things that happen to dairy cows and egg laying chickens and how those industries are tied to the meat industry. From that day on I couldn’t ignore this link and the unnecessary cruelty that these animals suffer. 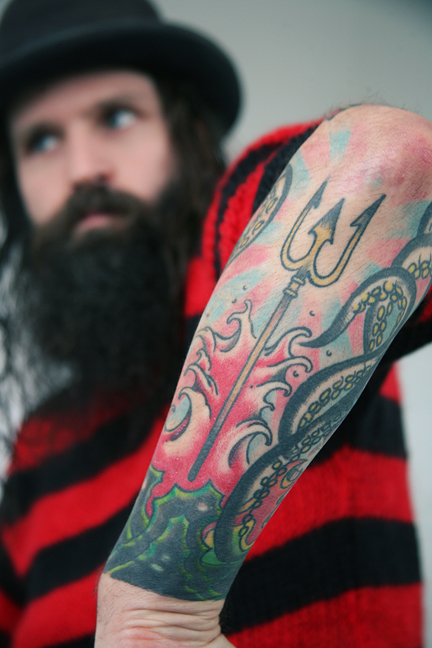 DB: I had a similar experience at 18. I finally had to live in consistency with the knowledge I gained from watching a doc on factory farms. I got my sleeve as a big reminder to stay true to those values. Speaking of ink, who does your ink, and what tatt is your favorite? Any good stories behind them? 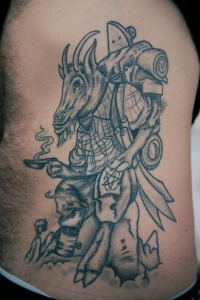 LP: The first tattoo I got was when I was fifteen and it’s the words “No War, No KKK, No Fascist USA” across my back. This is one of MDC‘s songs. My brother gave it to me with a whole made tattoo gun. I returned the favor and tattood the same statement across his back. I get tattoos from different artists. It really depends on where I am. The last three tattoos I got were in Oregon. I got a camping goat on my side from Roll Hardy at Atomic Art Tattoo Studio, a raven on my shoulder from Ryan Mason at the all vegan tattoo shop Scapegoat, and some finger tattoos from Steve Fuller at Triple Six Tattoo in Ashland, Oregon. Right now my favorite is probably the trident on the back of my arm. 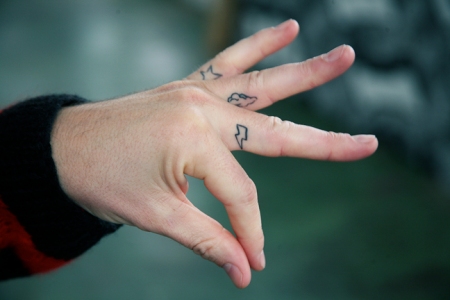 DB: The camping goat seems really anti-establishment. Does counter-culture still exist?
LP: Yeah, I definitely think counter-culture exists and hopefully it always will. Counter-culture keeps people in check, because they know that at the right time an idea sparked from the subculture can explode in the face of convention and social norms. There are plenty of ideas that run counter to the mainstream and I know a lot of these things will eventually get their time to shine.

DB: That’s a pretty eloquent expression with both realism and optimism. It’s refreshing. What made you start giving a crap about ecosystems and animals? And do you think other people are finally ‘getting it’ with environmentalism?
LP: I’ve always cared about ecosystems and animals. My parents were a big part of shaping my compassionate point of view towards this planet.  The environmental movement is great but I don’t think a lot of people really get it. There’s a lot of people who call themselves environmentalists because of their Prius and then eat a bloody hamburger. This is the epitome of hypocrisy. You’d be doing the world better by driving a fleet of gas guzzling Hummers while eating a veggie burger. Frankly, I’m sick of the green movement trying to sweep under the carpet and blatantly ignore one of the biggest environmental disasters of this century – factory farming and slaughter houses. It’s time for people to become aware of this fact. But to end on a more positive note I just worked  on a great project with the director Henrik Hanson at RSA films. It’s a psa on driving veggie oil cars (click Vegetable Oil). It just aired on the Sundance channel and has gotten a lot of good feedback. 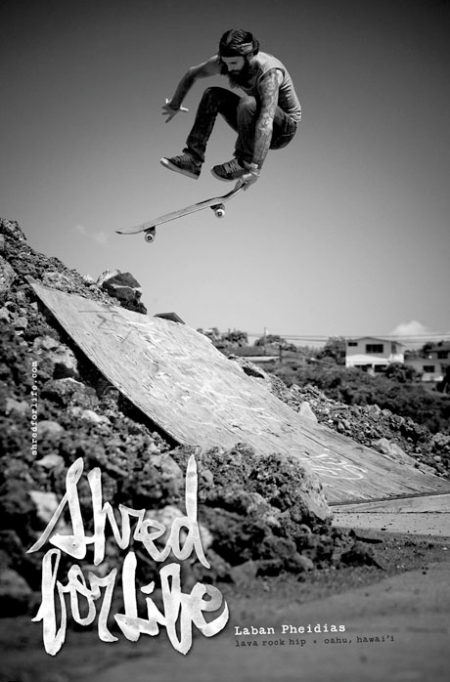 DB: The meat/global warming connection is so frustrating! Especially when people like Al Gore are not making it priority number one. Cool vid!  I made a similar PSA for CurrentTV about oil addiction. We should collaborate someday soon! Is there anyone you’ve worked with that totally blew your mind? Who do you want to meet or work with that you haven’t yet?
LP: My business partner Ted Newsome continually blows my mind with his dedication and creative touch. One of these days I would like to work with Nick Nolte. I wish I could go back in time and work with WC Fields. That would be amazing. 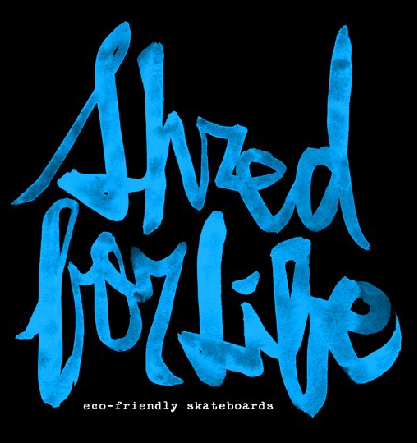 DB: How did you come up with your eco-skateboarding company? Where the hell can I buy one of these boards, and who are the artists doing board graphics for your shred sticks?
LP: Me and Ted have some good friends that don’t have a skateboard home right now and we thought why not channel these guys into a new deal. It’s called Shred for Life. Right now the team consists of myself, Chris Lambert, Jesse Hotchkiss, and Chuck Wampler. No boards or merch are for sale yet, but it’s all in the works and hopefully stuff will be available in the near future. Right now Hotchkiss is on graphic duty and coming up with some good ideas. 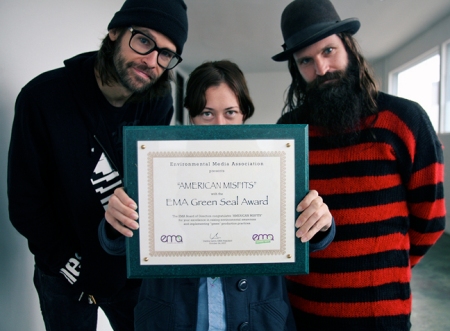 DB: You’ve also won an EMA award for doing a really green production. Tell us about how you did that, and how I can that too on my next production! I’m so jealous! Green with envy… derr..
LP: We’ve always tried our hardest to be a green production company. It’s basically being conscious of every part of production and trying cut waste wherever possible. One of the first things we did was to convert all our cars to run on veggie oil. Now we have a 250 gallon tank in our car port filled with veggie oil that we get delivered from a company called green diesel (greendiesel1.com). There is a lot of recycling, vegan catering, and common sense things like using environmentally friendly paint for sets. We took it to a whole other level on one of our episodes of Built to Shred. It’s the episode called “Solar Shred”. Check it out. You can watch it for free at hulu.com.

DB: What advice do you have for anyone who wants to make more ethical lifestyle choices, but still wants to have fun and be cool, AKA a Discerning Brute?
LP: To me the only way to have fun and be cool in life is to be ethically conscious. Of course in art I like to break all the rules. Also, I think it’s a hell of a lot cooler to do what you believe even if everyone seems to diss you because of it. Granted, sometimes it won’t be a lot of fun, but hey, doesn’t mean you can’t have ball anyway without the haters.

DB:  Who you are listening to, what you are reading, what you are eating a ton of,  and should we do it too?
LP: I’m listening to my favorite band Taraf de Haidouks. I’m reading about anything that interests me on wikipedia.org. I’m eating a lot of homemade hot sauce. And you should check it all out.

DB: Anything else we need to know?
LP:You need to know about the Sea Shepherd Conservation Society and Peta. Also, about how amazing “gypsy” music is. 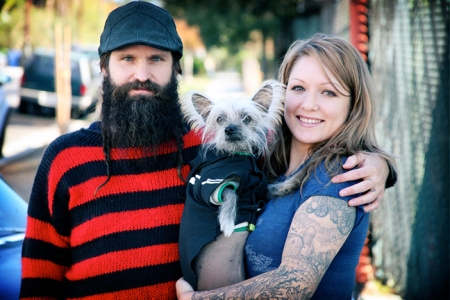 DB: Lastly, give us a super-easy recipe.
LP: Here’s a recipe for radness: one vegan potluck, two quarter pipes, four cases of New Castle, one bottle of absinthe, and the Petrojvic Blasting Company playing the party.