Skinny Bitch and friend of The Discerning Brute, Rory Freedman has done it again. But this time, she’s going for the family jewels! I had some time to call up this savvy bitch on Skype and get the scoop on everything from erectile dysfunction and ‘whack & sniff’ testing, to prostate health and the hundreds of buff vegan athletes. If you’re a guy that doesn’t want a gut to be your rite of passage, then check this out. Skinny Bastard will knock your jock-strap off with hard-hitting truths and no-nonsense advice. Say goodbye to that beer-gut and hello to hard-bodied handsomeness. Your heart, your brain, and your libido will thank you.

Get the friggin’ Book, and enter to win an awesome prize!

END_OF_DOCUMENT_TOKEN_TO_BE_REPLACED

After the holiday binge, many of us are ready to hit the ground running, and we do! Things go great for the first few miles, but by Valentines Day, we’ll have fallen off track and stopped going to the gym as often as we said we would. We start smoking and drinking again, we have more than a cup of coffee a day, and we even find rationalizations to eat unhealthy and ‘convenient’ foods. Worst of all, while we hurt our own bodies and brains – we often are unknowingly hurting other people, animals, and ecosystems in the process.

What if I told you that there’s a resolution you can make that will help you stay healthy and slim, that will curb global warming more than getting a hybrid, that will save lives, and help stop torture? Sound too good to be true? This year why not make a resolution that helps everyone and everything? Even if you’re selfish – you’ll look better, smell better, and taste better. Go vegan! It’s the greenest, healthiest, most compassionate lifestyle choice we can make.

I have compiled a list of New Year motivational stuff to keep you on track, and moving forward!

1. If you care about global warming, you should consider eating less meat. At least that’s what top UN climate scientist says.  Yesterday, the BBC released yet another article quoting the UN’s top climate scientist, Rajendra Pachauri, who chairs the Intergovernmental Panel on Clim

ate Change (IPCC). Dr. Pachauri will make a speech tonight in London. “The UN Food and Agriculture Organization (FAO) has estimated that direct emissions from meat production account for about 18% of the world’s total greenhouse gas emissions,” he told BBC News, “So I want to highlight the fact that among options for mitigating climate change, changing diets is something one should consider.”

on CharityBuzz from September 3-18th, you can bid on unique celebrity experiences, rare memorabilia, and compelling special merchandise online to raise funds for the animals, to advocate for their protection, and to save lives. Support Farm Sanctuary and make a bid! You can shop for the most unusual and special items and gifts – everything from yoga classes to once-in-a-lifetime celebrity one-on-ones, all while giving to the animals!  And some things you were going to buy anyway, like yoga and dinner. Right?  May as well have your money supporting a wonderful cause! How about a private lunch with

on the lot of “Heroes” or a visit to the set of Forest Whitaker’s latest movie and lunch with the star himself, or a gourmet cooking class in Los Angeles with “Skinny Bitch” Rory Freedman and Spork Foods?  How about a shopping spree for the ladies in your life at Funky Lala Boutique, as your own celebrity stylist teaches you what styles look good on you, and what to be wearing this season or Joan Jett VIP Concert Tickets with Hotel & Airfare for Two? Need a laugh? Meet Fred Willard (Best in Show, Waiting for Guffman) or Paul Reubend (Pee Wee

Herman!) Perhaps a Long Distance Reiki Animal Communication Session or a luxe, organic faux fur throw from Loyale? Over 70 items NOW available for the bidding, as you’ll see there is definitely something for everyone!

I always thought of LA as a big, dirty strip-mall that extended for miles in every direction. Now, however – after visiting for a few days with an amazing tour guide, I think of LA as a big, dirty strip mall with tons of vegan joints for miles in every direction. I arrived in LA with a suitcase and a big bag of Dr. Cow’s Tree Nut Cheese to share with the west coast.

Vegan Spot had some yummy sandwiches. I had the “Cheesy Roast Beef” and Zoe had the “Philly Cheese Steak”. They thin-slice seitan, and smother it in onions and melted-vegan cheeses. It was pretty scrumptious.

We headed over to a wine and cheese party where we ate copious amounts of Dr. Cow’s Tree Nut Cheese with the likes of Skinny Bitch: Rory Freedman, Emily Deschanel, Ari Solomon of Scent of Scandal, Karen Dawn and Paula the pitbul of Thanking the Monkey, among other amazing veggies!

We shared some Pinkus organic vegan beer over Hemp-Nut and Blue Manna Dr. Cow’s Tree Nut Cheese at Good Micro Brew & Grill. This appeared to be their only known vegan beer – and lucky for us – it’s a really delicious, light German beer. The Germans don’t use Fish Bladder (AKA isinglass) in their beer. Thanks Germany! This places serves meat but they have some decent veg options like the orange tofu. Ana loved the cheese! She works with Guayaki Yerba Mate, and gave me mate and a gourd!

Then we visited the historic Mexican district of Olvera Street and had vegan Mexican-chocolate lattes at Casa de Sousa, a vegetarian Mexican cafe!

and rumor has it she may reveal something quite excting (watch out Oprah…)! Special guest and friend of DB, Rory Freedman (Skinny Bitch, Skinny Bitch in the Kitch) will be her guest.

3. Sign this petition to help call for a South Atlantic Whale Sanctuary, and help end whaling!

3. Don’t Teese Yourself! Ok, fine – Teese yourself. It melts! 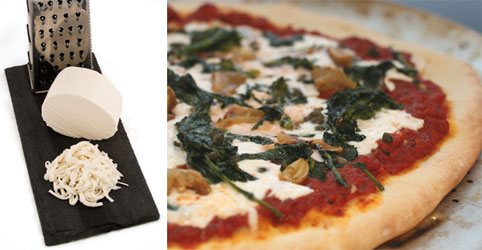 5. Fujimori is being tried for Human Rights Violations in Peru. He is the first head of state to be extradited to his home country to stand trial for human rights violations. Praxis Institute for Social Justice invites you to visit their bilingual liveblog and follow current developments in the ongoing human rights trial of former Peruvian President Alberto Fujimori.

“Former Peruvian President Alberto Fujimori served from 1990-2000 and is suspected of committing innumerable human rights violations during his decade in office. These allegations have been documented by the Peruvian Truth and Reconciliation Commission (TRC) in its Final Report, published in 2003, and the trial against the former president marks the fulfillment of one of the TRC’s most important recommendations for preventing future human rights violations by the state.”

6. Non-leather belts can be more than a hemp braid – thank god.

7. On Tuesday, the USDA made it official, implementing a no-downer policy for cattle in the United States. Read the article HERE. ‘Downers’ are animals too sick or injured to walk or stand, and are typically left to suffer – as veterinary care and euthanasia cost more than most farmers will make on the body of the animal – making it economically undesirable, and ethically disgusting.

Directions:
Boil pasta. Combine all ingredients aside from bread crumbs and pasta in a blender or food processor. Mix the “cheese sauce” with the boiled pasta. place in casserole dish, and top with breadcrumbs. Bake on 350 for 15 – 20 minutes.

Tip – for a cheesier dish, shred additional vegan cheese over the bread crumbs before baking.

The Farm Sanctuary Gala was amazing! Being with so many compassionate, wonderful people in one room was inspiring. I met my president, Dennis Kucinich, got felt up by Skinny Bitch: Rory Freedman, and ate amazing pastries from Vegan Treats!

I had the pleasure of producing a video for the Gala:

Thanks to Kaight Shop for my hot organic blazer and organic green shirt by Turk & Taylor! I also wore an organic tie by John Patrick Organic, thrift pants, and NOVOCAS Dennis Brown shoes. If you haven’t been to Kaight in the LES, definitely check it out. There is a nice sized organic menswear section!