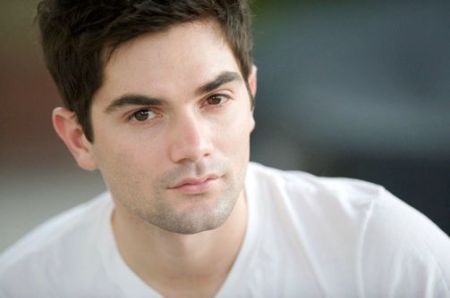 TROY FARMER
When he’s not reading or writing for The Brute, Troy helps run raven + crow studio, a small, Brooklyn-based design firm he co-owns with his wife, Katie. For over ten years, the two have dedicated themselves to making the world a prettier place, through good, quality design and by choosing to work with clients whose causes and ways of doing business create a kinder environment for everyone, human and animal alike.

Troy first became vegan in 1996, when things were a little tougher for anyone who felt the need to reach past the box of Fantastic Foods falafel mix. Living in a small, southern college town, Troy had to resort to learning to cook himself. This involved a few minor disasters, namely the Infamous Peanut Butter Lasagna Incident of ’98, but all in all, it was an age of discovery for the college vegan. Since then, he’s been refining his cooking, having found a distinct pleasure in hammering out new recipes and cooking for friends.

With over 15 years of experience playing music and an ever-present interest in the independent music scene, Troy loves discovering new sounds as much as he does new vegan foods.

With ‘Whistle While You Work,’ we hope to bring you innovations in both vegan cooking and music, posting a new recipe and complimentary music review once every two weeks. Sometimes the music will inspire the food, sometimes the food will inspire the music, but, with every entry, we’ll give you new finds for your ears and your taste buds.

In the times between posting on The Discerning Brute and writing bios in the third person, Troy can be found on blog he and Katie have, kindnessofravens.blogspot.com, and at ravenandcrowstudio.com. And probably somewhere in real space too. Maybe. 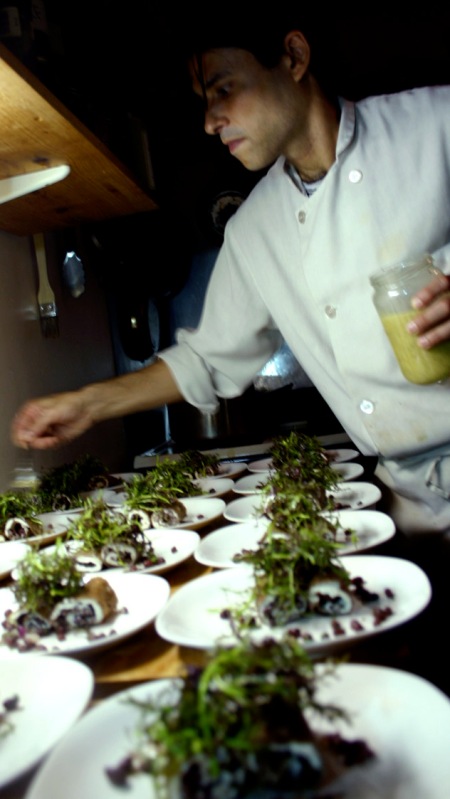 CHEF MATTEO of 4CV
Chef Matteo Silverman, 33, originally from San Jose/San Francisco, has  lived in New York City for 8 years.  A long time-vegetarian and vegan
for over 15 years, Matteo strives to elevate plant-based cuisine to the respect it deserves. He seeks fresh, seasonal ingredients that are  sourced locally and organically or bio-dynamically grown. Wetting his feet in the San Francisco restaurant scene, he worked at the infamous  Green’s, Millennium, and Paul K. before moving to NYC in March 2001. He graduated from the Natural Gourmet Institute for Health & Culinary  Arts that July. Upon graduation he worked at various bakeries and  restaurants honing his skills and learning the trade.  Along the way he has worked privately for families and high-profile clients in entertainment and finance, most notably Montel Williams.In January 2003, Matteo launched 4 Course Vegan, a weekly supper club in Williamsburg, born out of pure passion for food, people, and wine.  January 2009 marked the 6th anniversary of 4 Course Vegan.

Nik Tyler was born and raised in NYC.  A lifelong vegetarian, he made the connection to go vegan when he was 18 and has been an animal rights activist ever since.  Nik matriculated at Rudolf Steiner School, where his artistic sensibilities were nurtured, leading him on to The High School of the Performing Arts (“Fame”) and then on to NYU: Tisch School of the Arts (Film & TV).  Now residing in the City Of Angels, Nik works as an actor in film and tv.  He believes that every day is an opportunity to evolve, to learn something new, to expand his consciousness – and that is what his blog will reflect – a truth-seeking journey into the ethical issues we face every day in LA, NYC and the wide world beyond.

PHILIP MCCLUSKEY
Philip created the Raw Food Rockstar Community after saving his own life. He’s happy to report that he’s found the secret to healthy weight loss and vibrant living after trying every fad diet out there but having no luck (actually progressing to a morbidly obese weight of 400lbs).  He tried Weight Watchers, Atkins, Blood Type, South Beach, gym memberships, personal trainers, diet pills, water fasting, vegan, vegetarianism, hypnotism, guided imagery, nutritionists, martial arts, exercise videos, while buying every gadget, tool, book and magazine he could find.  None of it worked and at rock bottom he stumbled upon the key that literally saved his life: RAW LIVING FOODS!

EMAIL me if you find a link, product, tip or recipe you want to share with other Discerning Brutes, or if you’d like to be considered as a featured contributor.